In rare cases, a decision is made to remove a tree in Brisbane. These decisions are not taken lightly by the Evergreen Tree Care team. Being a pro arborist Brisbane, it is important that all the facts are presented to the tree keeper or tree manager so that the tree is not being removed for the wrong reasons.

The wrong reasons for removing trees

The wrong reasons for removing trees are to plant more grass, improve a view of the city or to stop leaf drop into a pool or gutter. Sadly in most cases the tree is removed as result of any of the above- mentioned excuses. More importantly though, it is the poor planning of humans, their lack of insight and the human nature to dominate nature which drives the end decision for the tree’s removal.

We believe that in most cases a reasonable outcome can be achieved so that the tree does not need to be removed and we have had much success in accomplishing this outcome, even though some people won’t budge from their stubborn ways or they are just naturally inclined to bully those around them. Therefore, little to no sympathy is given to those people who build pools and structures beneath tree canopies, usually under a neighbour’s tree, and then expect them to remove what is usually a sound tree providing many benefits to the tree keeper’s property and the nearby environment. 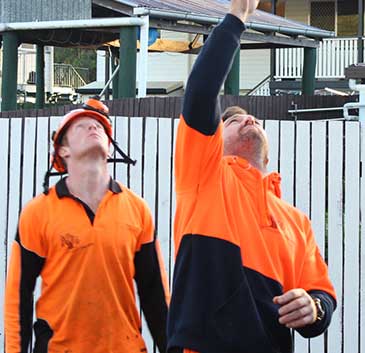 However, there are some circumstances where a tree needs to be considered for removal. Due to structural issues that create imminent hazard, weed species listed for removal, trees with disease or are under significant stress or decline or simply the wrong species in the wrong place. In saying that though, even the wrong species in the wrong place can be a manageable entity. Often tree loppers Brisbane will make the mistake of just pruning or lopping the tree.

A recent case found a Corymbia citriodora or spotted gum located in the rear of an urban block. This species is usually not problematic and if they present good vigour and a sound structure they can live to a reasonable life expectancy and add to the urban forest. As the C. citriodora is an endemic species in the Brisbane area we tend to maintain a lot of this species in the urban environment. Sadly however, this specimen, despite presenting well on an initial investigation; a notable fungal pathogen was observed near the base of the tree, a Phellinus robusta. In some cases, this is not enough alone to condemn a tree. However when observing this specimen more closely we found that the tree, when affected by wind, was moving in the soil; or pivoting noticeably in the socket, indicating the root mass has begun to decay. This observation usually makes an arborist nervous and as a result the decision to remove the tree was based on the structure being undermined and affected by an un-treatable and terminable fungal pathogen. In the forest this isn’t an issue, but in the urban environment this tree did present as a likely failure candidate. The tree was removed and the investigative observation of the tree base found that significant decay had already occurred, though not yet enough to affect the tree’s vascular system. Which in this case helped mask the tree underlying defects?